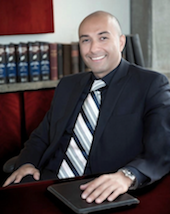 Salar Atrizadeh, Esq. is licensed to practice in the State of California, District of Columbia, and the United States District and Bankruptcy Courts. He has an extensive background in technology and holds a bachelor's of science degree in computer information systems with a minor in database management systems.

Mr. Atrizadeh is an adjunct professor at California Lutheran University where he teaches business law courses. Mr. Atrizadeh has been interviewed by local, national, and international news and media outlets. He has also served as a legal expert on various panels and educated the public on the importance of privacy, security and regulation.

District of Columbia Court of Appeals

United States Court of Appeals for the Ninth Circuit